What is Muay Thai?

Muay Thai, which translates as ‘Thai boxing’ can trace its origins back hundreds of years to the ancient battlefield tactics of the Siamese army (modern-day Thailand) but the sport wasn’t formalised until the start of the twentieth century. It is a form of close-quarters combat employing clinches, strikes and punches to take down an opponent. Read on to find out what is muay Thai fighting as well as answers to the question ‘what do you learn in Muay Thai’.

Muay Thai is the national sport of Thailand. Its most famous champions – including Samart Payakaroon, Dieselnoi Chor Thanasukarn and Saenchai – are nothing short of national superstars, revered like Hollywood celebrities or the best footballers in Europe.

Muay Thai is known as the ‘art of the eight limbs’ referring to the eight points of contact used to mimic the weapons of war, namely fists, elbows, knees and feet.

Here, you’ll discover the answers to the questions ‘what is muay Thai’ and ‘what is Thai boxing’. Are they the same thing? You’re about to find out. 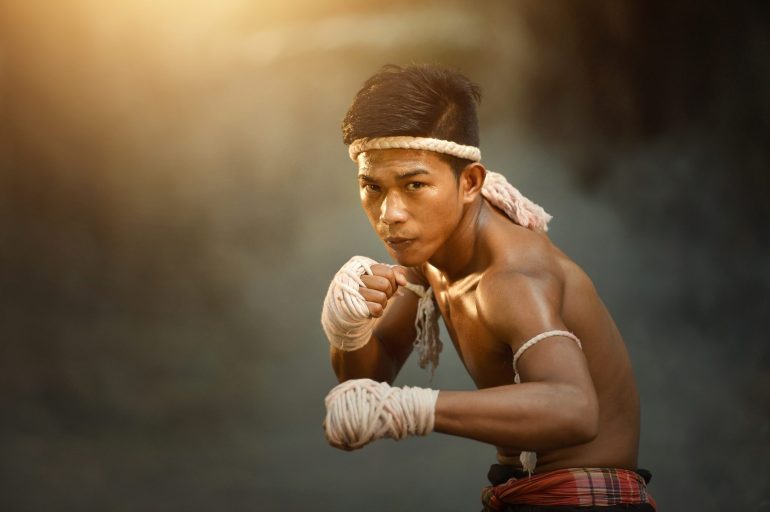 The answer to the question ‘what is muay Thai fighting’ can be traced back to the thirteenth century Sukhothai dynasty. To defend the city of Sukhothai, soldiers were schooled in armed and unarmed combat techniques, including how to use the entire body as a devastating weapon. Under constant threat of war, this form of unarmed fighting became ingrained in Thai culture.

In fact one of the most famous – possibly apocryphal – stories in Thai culture involves an eighteenth century warrior and folk hero by the name of Nai Khanom Tom. Imprisoned in Burma, he was challenged by the Burmese king to pit his wits against his nation’s best fighters. He proceeded to defeat ten in a row. To celebrate his victories, March 17th is dedicated to him as National Muay Thai Day in Thailand, and Nai Khanom Tom is forever known as the founding father of muay Thai fighting.

Muay Thai was formalised in the early twentieth century. At this point it borrowed heavily from British boxing rules, for example the fights moved from open courtyards into boxing rings, and the fighters swapped wrapping their hands in rope and switched to boxing gloves.

Today, muay Thai is increasingly popular outside of Thailand and is considered to be among the most effective striking arts in the world. In 2021, the General Assembly of the International Olympic Committee granted full recognition to muay Thai boxing as a full Olympic sport.

What is Thai Boxing?

Muay Thai, or Thai boxing, is the perfect combination of raw power, lightning-fast speed, brutal efficiency and elegant simplicity. It uses every weapon available to the human body and has been battle-tested for hundreds of years.

Muay Thai is a stand-up combat sport that utilises punches, kicks, elbow and knee strikes as well as throwing techniques, locks and, similar to jiu jitsu, using an opponents’ strength and momentum against them.

The answer to the question ‘what is muay Thai fighting’ can be categorised into three main techniques – attack, defence and counter. Attack includes punching, knee and elbow strikes, kicks and clinches; defence includes blocking, dodges and lean backs and deflections, and these are used in combination to counter-attack.

As with all forms of unarmed combat, there are lots of variations of striking, kicking, punching and blocking. Unlike other martial arts, there is no system of grading or belts in muay Thai. The only belts won are those for winning title fights at specific weight classes.

What do you Learn in Muay Thai? 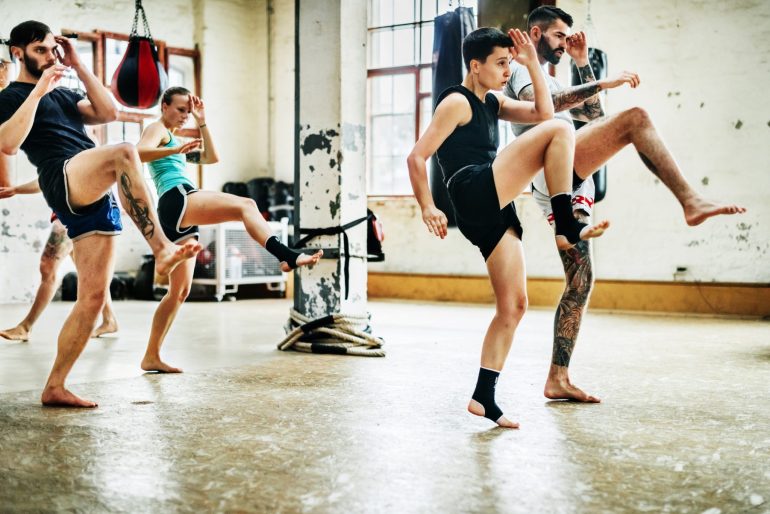 Like many – if not all – martial arts that emanated from the Far East, muay Thai is more than just a series of fighting techniques, it is a way of life and a spiritual practice.

There are many traditions associated with muay Thai, including a ritual dance performed before contests known as ‘’ which roughly translates as ‘war dance saluting the teacher’ in reverence to the sport’s elders.

The origins of the distinctive headbands, (‘mongkhon’) and armbands, (‘pra jiad’) are from the time when young men wouldwai khru ram muay go to war with a piece of cloth torn from (usually) their mother’s sarong and they represent good luck.

In fact there is so much more to the question ‘what do you learn in muay Thai’ than fighting. The sport has close ties to Buddhism and like the religion itself, muay Thai teaches compassion, respect, self-discipline, humility and self-control.

So now you know the answer to the questions ‘what is muay Thai’ and ‘what is Thai boxing’, we can confirm they are in fact the same thing!