Motocross is one of the world's most popular motorsports and for very good reason. It’s fast, furious and filthy and you get an awesome adrenaline rush just watching, never mind racing! The sport has a very rich history and takes place on off-road tracks with turns, hills, jumps and obstacles. Read on to find out the answers to the questions ‘what is motocross’ and ‘what is a motocross bike’.

Sometimes described as the greatest sport in the world, motocross is among the most physically demanding and exciting of all motorcycle sports.

It’s dangerous, loud, raucous and breathtakingly fast. Professional riders are exceptionally skilled, supremely fit, smart and fearless! Known as MotoX or even just MX, here we’ll let you know the difference between motocross vs supercross and we’ll explain what is motocross racing.

Hang on, it’s gonna be a wild ride!

A Short History of Motocross 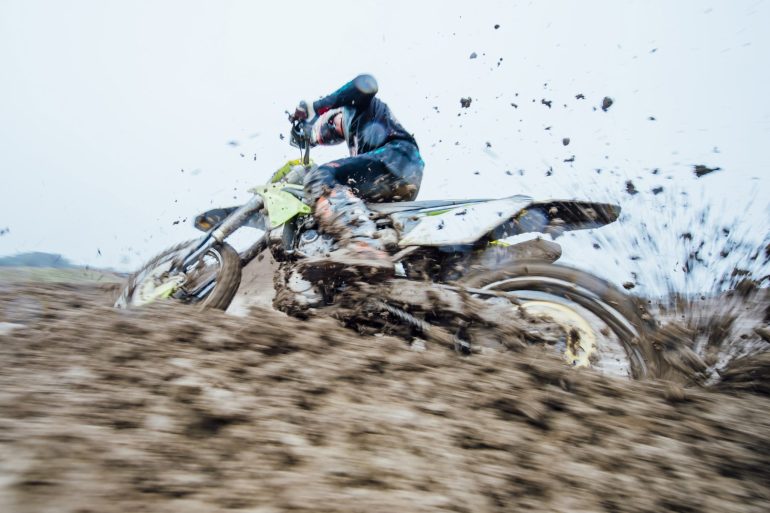 Motocross – a portmanteau of the French word for motorcycle, ‘motocyclette’, and ‘cross-country’ – can trace its roots back to the motorcycle time trials competitions held by the Auto-Cycles Clubs in the early years of the twentieth century.

Originally known as scramble racing, after one of the judges called a race ‘a rare old scramble’ – indeed the bikes are still known as scramblers today – the first official race was held in Surrey in 1924. From there, the sport grew in popularity, especially after World War II when bikes got lighter and faster.

When the Americans asked ‘what is motocross racing’ in the 1970s, the sport exploded. The bikes continued on an upward curve of design and technological development thanks to the Japanese manufacturers Yamaha, Honda, Kawasaki and Suzuki, Husqvarna from Sweden, Gas Gas from Spain and KTM from Austria.

Today, not only does motocross has a massive global following, it’s even spawned other successful offshoots including supercross, freestyle motocross, ATV (quad bike) motocross and even sidecar racing known as sidecarcross. So exactly what is MX racing and what are the differences between motocross vs supercross? You’re about to find out.

Ladies & Gentlemen, The Race Is About To Start… 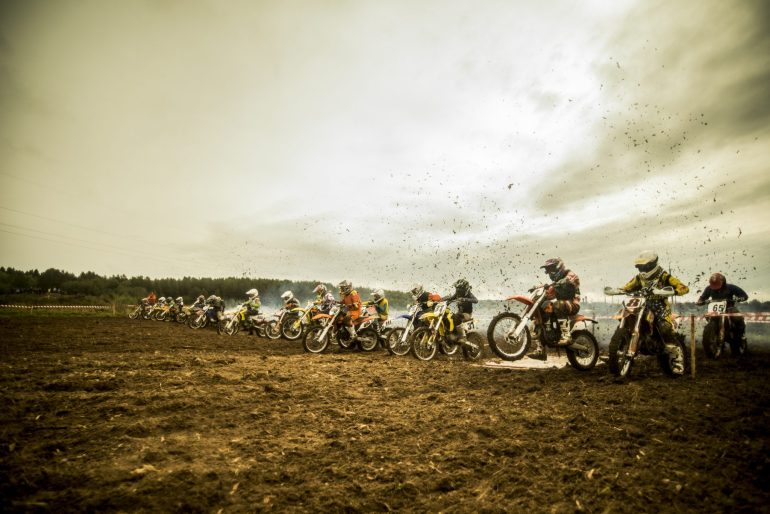 Revved up at the start line (Photo: Aleksander Rubtsov via Getty Images)

We’ll explain ‘what is a motocross bike’ in a moment but here, we’ll answer the question ‘what is motocross racing.’

The goal of motocross racing – or as some people ask ‘what is MX racing’ – like most motorsport races, is to cross the finish line ahead of everyone else, but it’s not quite that simple.

This is not racing on a lovely smooth, flat course. The courses are brutal off-road tracks between one and three miles long. They’re made up of all types of rough surfaces, steep uphill and downhill sections, jumps, muddy pools and left and right turns which are wide, narrow or banked.

Motocross racing is physically and mentally demanding and injuries are not uncommon, especially when you’re flying through the air and landing on rough, uneven terrain at speeds in excess of 90 mph.

There are four major motocross competitions –

Mainly held across Europe but with races all over the world, it’s broken into three classes – MXGP for 450cc bikes, MX2 for 250cc bikes and Women’s MX. Races have a duration of 30 minutes plus two laps.

Held in the US from May to August, the classes and race length are the same as the FIM Motocross World Championship.

Held at the end of the season, this competition is for teams of three representing their countries and there are MX1, MX2 and Open classes.

Motocross vs Supercross - What’s the Difference? 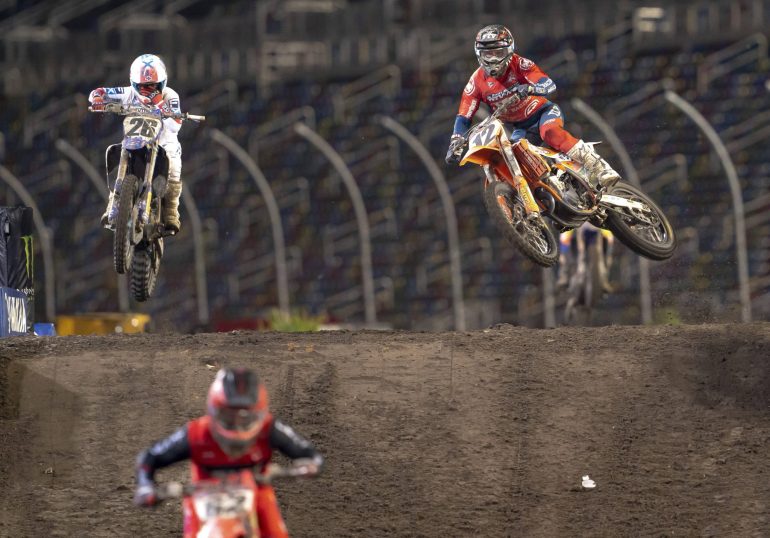 We’ve explained ‘what is MX racing’ but what’s the difference between motocross vs supercross?

Both are brilliantly-epic bike battles but supercross is slightly different.

While motocross takes place on long and natural outdoor tracks, supercross takes place in stadiums and indoor arenas. The courses are man-made, they’re much shorter and more compact and have tight hairpin turns and spectacularly high jumps.

Supercross races are around ten laps and will usually have races for 250cc bikes and 450cc bikes. The fundamental difference between the two disciplines is that motocross is all about endurance and physical toughness, while supercross requires a much higher level of technique and rhythm.

What is a Motocross Bike? 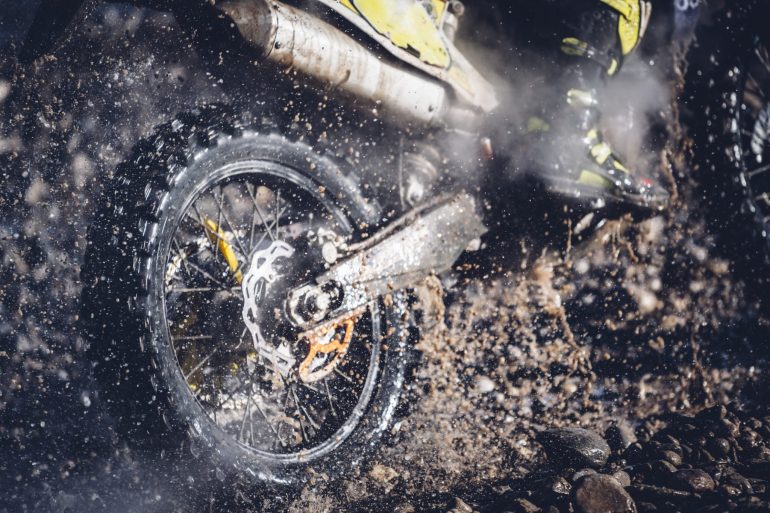 The working for a Motocross bike (Photo: Westend61 via Getty Images)

A motocross bike is a bike designed specifically for motocross and supercross. Motocross bikes range from 50cc kids’ bikes, to 250cc and 450cc competition bikes. They are designed for raw power but also need to be agile and light to cope with fast changes of direction.

The suspension is very stiff to cope with heavy jumps and landings and tyres are thick and knobbly to allow the bike to navigate loose rocks and gravel in all weather conditions without slipping.

Fundamentally, a motocross bike also needs to be tough. Very tough. There are no lights, mirrors or indicators, so they can’t be ridden on public roads, and they’re designed to be ridden hard and fast on all-terrain tracks.

Motocross bikes are also tuned for a very high RPM, so they can be ridden on the redline and the transmission has very close-ratio gears so riders will shift up and down very quickly to keep the power as high as possible for as long as possible. 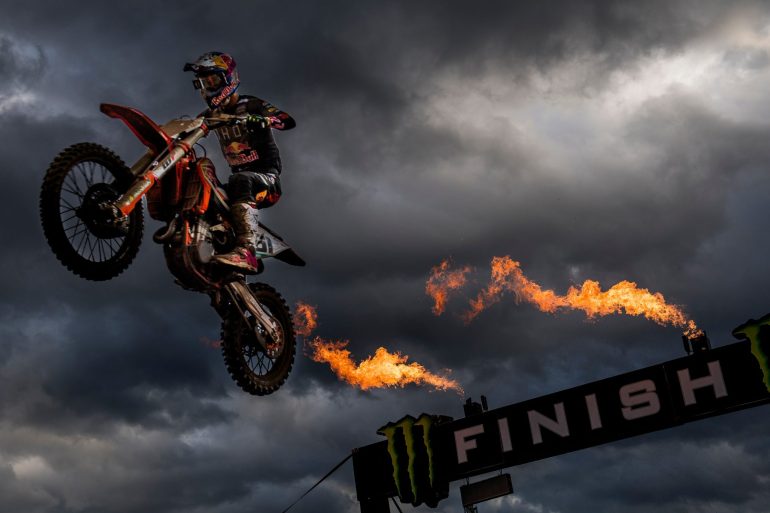 So now you know the answers to the questions ‘what is motocross racing’ and ‘what is a motocross bike’ as well as the differences between motocross vs supercross. While not for the faint hearted, Motocross is an astonishing and exhilarating sport enjoyed by vast numbers of people the world over.