Everyone knows the plan. Let’s go fly a kite. Up to the highest height. And with kitesurfing, you can soar with it. So, what is kitesurfing and what is a kiteboard? What’s the history of kitesurfing? Get ready to have kitesurfing explained and explored.

Kitesurfing is the all-in-one upstart of the world of board sports. Also known as power kiting or kiteboarding, this relative newcomer has already gained a massive following, with its global market worth expected to top $293 million by 2025.

A heady mix of surfing, sailing, snowboarding, paragliding and wakeboarding, kitesurfing’s popularity is definitely on the rise.

So, what is kitesurfing? That’s what we’re going to find out. Read on for everything kitesurfing explained, including the history of kitesurfing, what is a kiteboard and what equipment do you need for kitesurfing. 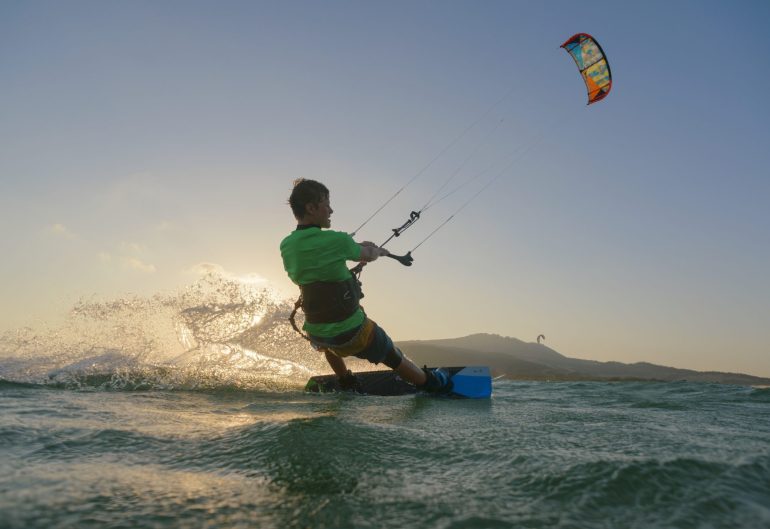 One way to answer “what is kitesurfing” is to look at all the sports it blends. Like surfing and wakeboarding, there is a board. As with windsurfing and many sailing sports, it harnesses wind energy. It even uses a parachute-like surface for this, much like paragliding and parasailing. But how does that translate into practice?

In short, in kitesurfing, riders use a large kite to propel themselves across the water on a board. The kite is controlled with a bar, and riders can use the power of the wind to do tricks and jumps, reaching potential heights of over 80 feet.

What is Kitesurfing vs Windsurfing 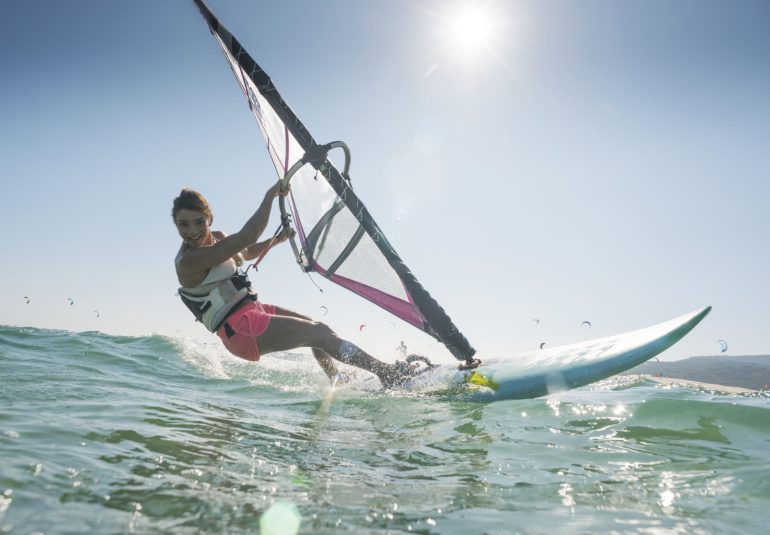 A windsurfer in action (Photo: Ben Welsh via Getty Images)

Both windsurfing and kitesurfing combine a surface water sport with wind power, but they use different equipment to do this and with diverging results. Everything about kitesurfing is smaller and more manoeuvrable than in windsurfing. The board is smaller, the equipment typically less onerous. And of course, it uses a canopy rather than a sail. All of which hints at one of the main differences, which is that windsurfing stays on the water surface, while kitesurfing is about soaring into the air. It’s also worth noting that a kite surfer is attached to both their board and their kite. A windsurf sail is only attached to the board.

What is Kitesurfing vs Surfing 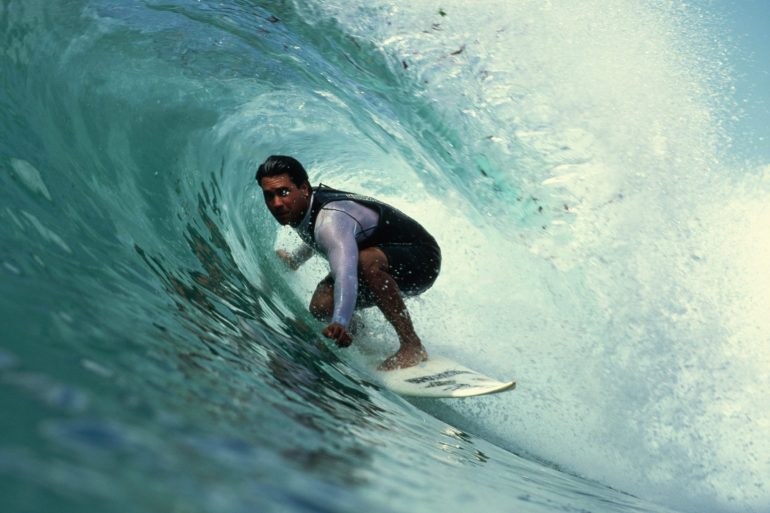 Aside from the lack of a kite, Surfing differs from kitesurfing in that it relies on the presence of waves. Not so for kitesurfing, which can be done as easily on flat waters. In fact, kiteboarding can even be done on land. 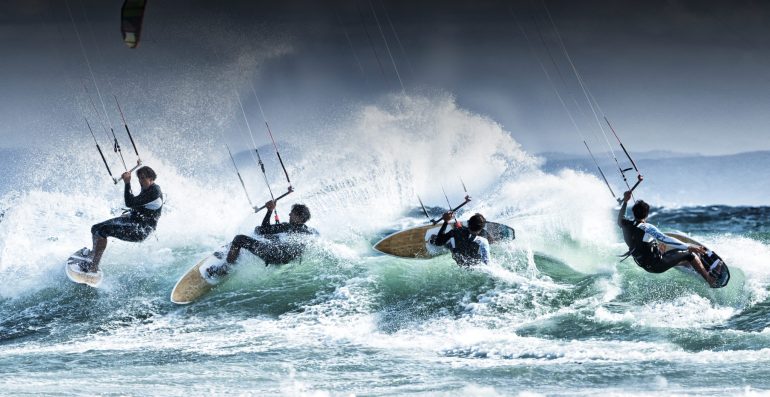 So, how does kitesurfing work? To have the physical mechanics of kitesurfing explained requires a deep dive into aerodynamics and the complexities of scientific calculation. Seriously, it includes equations and Newton’s third law and everything. For reference, Newton’s third law of motion states that for every action, there is an equal, but opposite, reaction.

A highly simplified kitesurfing explanation though is this: The flight of the kite is dependent on the forces of lift, drag, thrust and weight, particularly how they are balanced. When the wind meets the kite, the air flows both above and underneath its surface. The kite is a curved canopy and so the wind must travel further above it than below. The air above moves faster and so exerts less pressure on the kite than that at the bottom. That means more lift than drag and the kite lifts.

A quick word about the wind window. This is the term used to describe the area in which a kite will fly. It is not a stationary concept, but rather it is an area of sky downwind from an individual surfer. Its location is centred on the surfer. It is an imaginary 180 degree arc with sections numbered by how well a kite will fly in their vicinity.

Now for the harness, by which kite and surfer are attached. Several lines connect the two with a bar for the kitesurfer to use to alter the angle of the kite and the length of each line. Firstly, there is the fact that the tethering of the kite to the rider creates drag which helps the kite stay aloft. Also, by changing the position of the kite, the surfer can change the way it interacts with the wind, to go faster or slower. 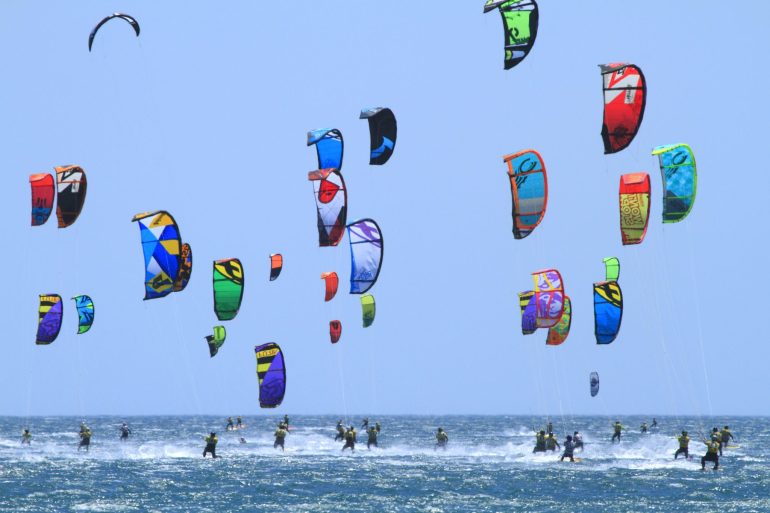 The history of kitesurfing is linked to the developments of all the sports which it incorporates, from the creation of different parachutes and canopies to wakeboards and surfboards. Patents for kitesurfing – or approximations of it – date from the 1970s onwards, with some of the main innovators being the French Legaignoux brothers and American father-son team, Bill and Cory Roeseler, founders of KiteSki.

It was in the late 90s that kitesurfing really took off, with the first competition taking place in Maui in 1998, and windsurfing manufacturers like Neil Pryde and Robby Naish creating commercial kiteboards from 1999.

Kitesurfing has since surged in popularity, perhaps because it is considered more accessible than some other similar sports, like windsurfing. As its practice has grown, so has the number of kitesurfing disciplines. Amongst these are slalom, freestyle, speed, wave riding, big air and even the land-based versions like kite buggying.

On the international sporting stage, kitesurfing has been part of the ISAF World Sailing World Cup since 2014 and was incorporated in the 2018 Summer Youth Olympics. It is now also an Olympic sport.

What Equipment do you need for Kitesurfing? 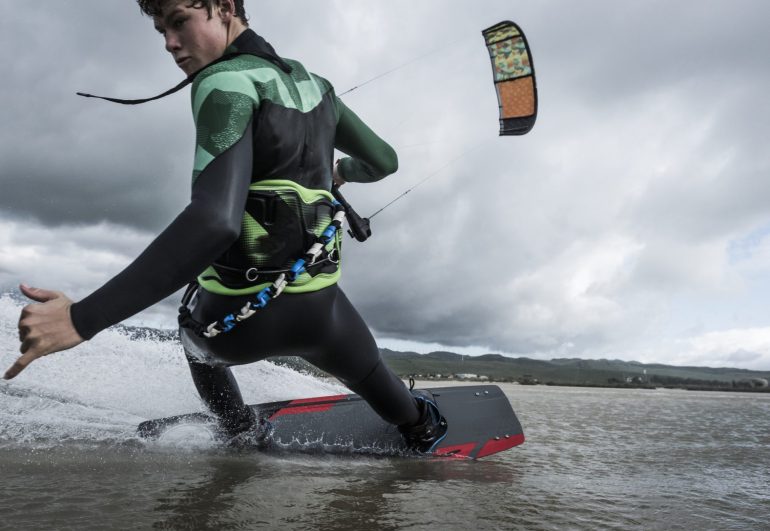 Firstly, it’s not kitesurfing without a kite – the fabric rectangular canopy usually made of ripstop polyester.

The two main types of kite are known as foil and inflatable.

Inflatables, officially called Leading Edge Inflatables, tend to be made of ripstop polyester. They have inflatable plastic bladders, usually one along the front and another at the back of the canopy. These not only keep the kite’s shape, but help it float and make it much easier to launch.

Foils have no inflatable parts and so rely on airflow to fill their cells and give them their shape. While trickier to use, foils are the more powerful choice.

As for shape and size, the choice varies depending on numerous factors, from surfer size to their surfing style and experience. What’s more, different weather conditions suit different sizes, although the general range is from 5 to 18 square metres.

The kitesurfer sits in or is strapped into a harness that is connected to the kite by between two and five ropes or “flying lines”. The lines are made of strong materials such as polyethylene and are threaded through the control bar, a rod by which the kitesurfer steers and manoeuvres the kite.

Often overlooked, this is a vital bit of kit that puts the surf into kitesurfing. But what exactly is it?

What is a Kiteboard?

What is a kiteboard? Seems obvious, right? It’s the board on which the kitesurfer glides on the water. But what are they made of? And how are they different from boards used in other sports?

Kiteboards are rectangular floating boards designed specifically for kitesurfing or kiteboarding. Generally between 3.5 and 5.5 feet long and around 1.5 feet wide, they are much smaller than, say, surfboards which tower over their user.

Most kiteboards are either twintip or directional in shape, the former of which is entirely symmetrical, allowing for use in any direction, as opposed to directional kiteboards, which only go one way.

Like snowboards, twintips usually have a wooden core, whereas directional kiteboards have a foam core like surfboards. Both tend to be encased in strong light materials, like fibreglass. There are also hydrofoil boards, which are becoming more popular thanks to their nifty knack for gliding higher on the water.

What is a Kiteboard versus a Wakeboard?

Kiteboards and wakeboards look very similar, both in their smaller size compared to surfboards and their rectangular shape.

However, the bottom curve or “rocker” is more pronounced on wakeboards to facilitate higher speeds, and kiteboards tend to have foot marking systems for when a trick or jump requires the surfer and board to part.

Finally, while wakeboards generally weigh 7 to 8lb, kiteboards are lighter, about 5 to 6 lb.

What Equipment do you need for Kitesurfing? Clothing and Safety Gear 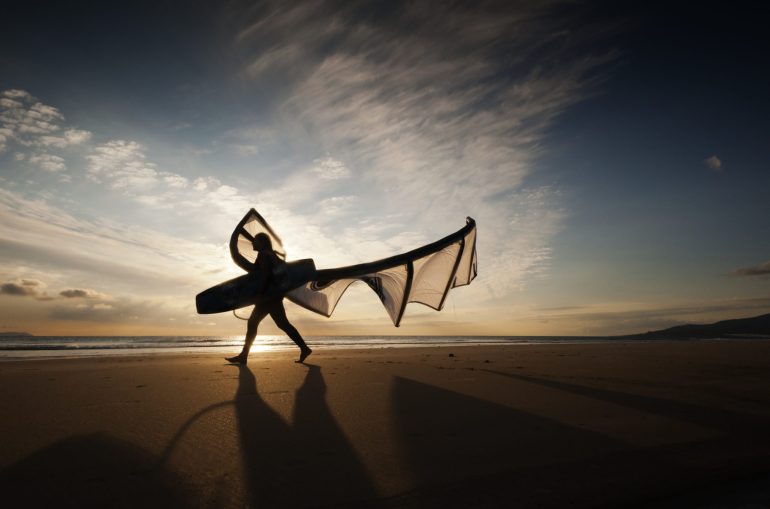 Yes, the main kitesurfing staples have already been listed, but in order to be safe, there are the following:

And there you have it. What is kitesurfing explained. From the history of kitesurfing to what is a kiteboard and what equipment do you need for kitesurfing, you’re ready to fly.