If you’ve never been jetskiing, you’re missing out! Jetskiing is a high-octane adrenaline rush that started out in the 1950s as a cool, fun thing to do. However, like many extreme sports, it developed a huge and dedicated following and the best freestyle jetskiers are now as famous as the world’s best surfers. Read on to find out the answer to the question ‘what is the sport of jet skiing’ and most importantly, how does a jet ski work?

The standard jet ski definition is as follows – a personal motorised vehicle ridden like a motorcycle and propelled by a jet of water that skims across the water’s surface – but they’re so much more than that! They are fast, manoeuvrable, powerful and fun!

Here, we’ll explain what is jetskiing. Buckle up, it’s going to be an awesome ride!

The History of the Jet Ski? 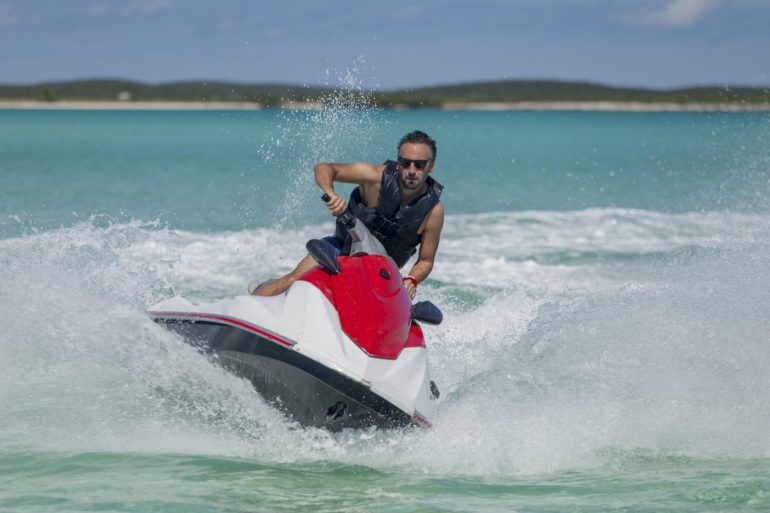 Soaking up the sun on a jetski (Photo: Steve Duchesne via Getty Images)

They were originally called water scooters in the 1950s, with the development of the German Wave Roller and the Amanda, manufactured by British motorcycle manufacturer Vincent.

In the early 1960s, the Sea Skimmer was powered by an inboard/outboard motor and could hit the heady heights of 25 mph.

A few years later, Clayton Jacobson II, an American-Norwegian banker and motocross enthusiast from Arizona asked himself ‘what is jetskiing’ and came up with the answer. His idea was to replace the outboard motor with an internal pump-jet and build the machines from fibreglass, which was stronger and lighter than the original aluminium models. After a few years of refinements, Kawasaki reached a deal to use Jacobson’s designs and in 1973 they launched the JS400 Jet Ski, selling over 200,000 and at the same time creating a brand new sport!

While Kawasaki owns the name jet ski, definition of the product is the same for all manufacturers. Yamaha makes the WaveRunner, Bombardier makes the Sea-Doo and Honda makes the AquaTrax.

How does a Jet Ski Work? 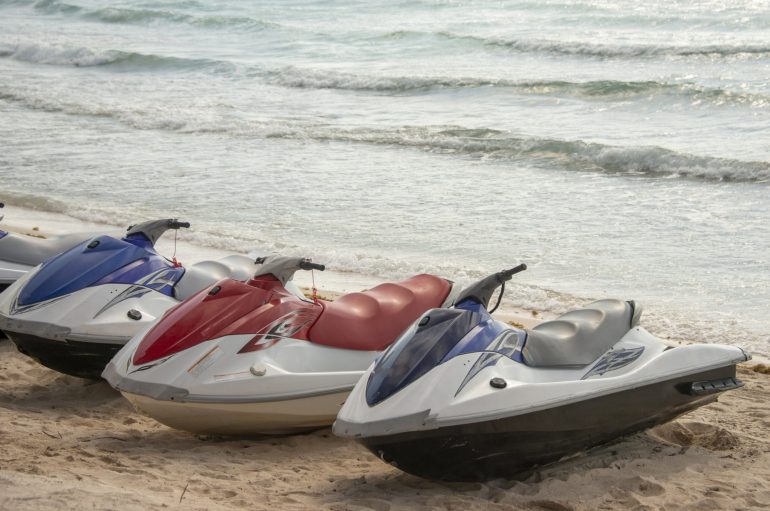 One of the most common questions about personal watercraft is ‘how does a jet ski work?’ Let’s start with Newton’s Third Law of Motion that states that every action has an equal and opposite reaction. Don’t worry, it’s quite easy to understand!

The key to making a jet ski move forwards is a small rotating pump called an impeller, which will usually have three stainless steel blades. When the rider pulls on the throttle, the pump sucks in water through an intake grate on the underside of the jet ski and the impeller pushes it out the back of the machine with great force. This is the equal and opposite reaction. To make the jet ski move forward, water is pushed backwards.

When you are jetskiing, to make the machine turn you move the handlebars left or right. The bars are attached to a cable that manoeuvres the water jet to one side or the other and as the steering is provided by the water jet, the craft is far more stable at high speeds and in fact is largely ineffective when you are going slowly.

On Your Marks, Jet Set, Go… 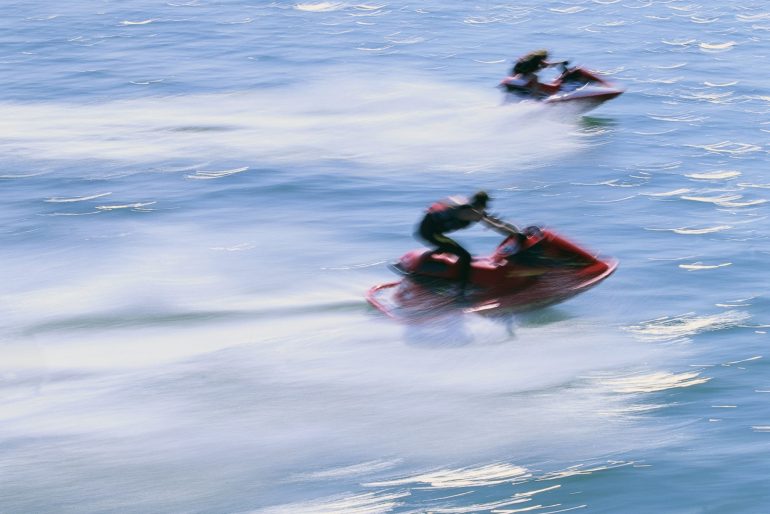 Held near to the coast, these sprint races are a maximum of 1,300m in length and the courses are marked with buoys (red for left turns, yellow for right turns). After a defined number of laps the rider at the front wins the race.

These are very long races that require refuelling. The circuit is marked by landmarks such as coastlines, islands, lighthouses etc.

Similar to closed circuit racing but these courses are much longer, more like a marathon than a sprint race.

These are long races that are broken up into stages. Once the first stage is completed, the jet ski needs to be transported to the start line of the next stage and so on until the final stage is complete.

These are competitions rather than races, whereby the riders are given three minutes to perform a routine that will involve a series of very technical stunts, flips, rolls and tricks. They are judged using three criteria – quality, quality and variety.

So now you know the answer to the questions ‘what is jetskiing’ and ‘how does a jet ski work’, it’s time to dive in!