Capoeira is an Afro-Brazilian art form that combines music, dancing and martial arts. It is believed to have originated in the sixteenth century when slaves were brought from Africa to Brazil and it was used as a form of self-defence. Over the centuries it evolved into the fluid and graceful art form that we know today. Read on to find out about Brazilian capoeira.

Pronounced ‘cap-wearer’, capoeira is a beautifully choreographed martial art that combines elements of acrobatics, gymnastics and traditional Brazilian dance as well as music and singing.

It is so popular it has been called Brazil’s second national sport behind the religion that is football!

Here, you’ll find out the answer to the question ‘what is the martial art capoeira’. 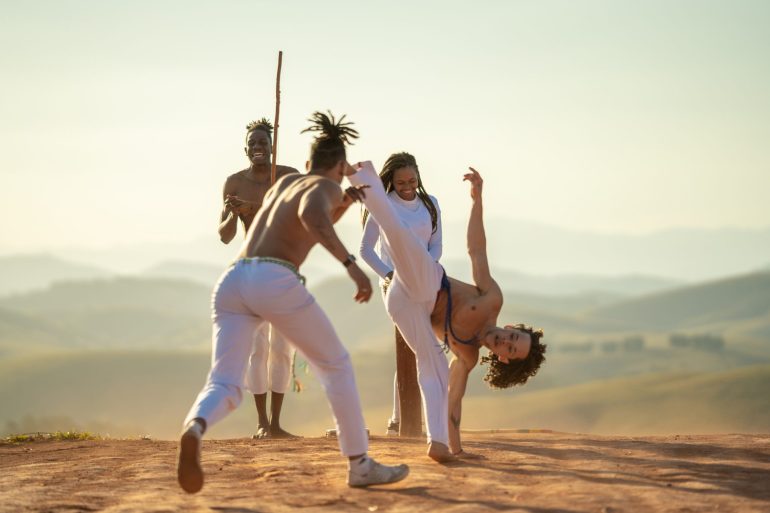 One of the world’s most graceful art forms has a dark history. In the sixteenth century, the Portuguese brought slaves from West and Central Africa to Brazil to work in their colonies. They were forced to undertake brutal, back-breaking work harvesting sugar cane and tobacco, while social interaction was heavily restricted.

For fear of retribution, the practising of martial arts was forbidden so the slaves devised a system of martial arts disguised as folk dance routines accompanied by music. When their masters weren’t looking they would add in the self-defence element.

The origin of the name capoeira has been lost to history (documentation from this period of Brazil’s colonial history is notably scarce) but one of the most popular versions of the story suggests it comes from Tupi (an aboriginal Brazilian tribe) words ka’a meaning forest and paũ meaning round, a nod to the hiding places of escaped slaves in the dense jungles of the Brazilian interior.

Slavery was abolished in Brazil on 13th May 1888, but capoeira martial arts was banned because the government feared a violent uprising from former slaves. Anyone found practising Brazilian capoeira was either sent to jail or punished in the harshest and most brutal way. Proponents of the art form were called ‘capoeiristas’ and they were only known by nicknames so the police couldn’t identify them.

Finally in the 1930s, capoeira – by now not just a system of self-defence but a vital part of Brazil’s cultural identity – was recognised by the government and it took until the 1970s for Brazil’s capoeira masters to travel around the world introducing it to the international community who embraced it.

So exactly what is the martial art capoeira? You’re about to find out. 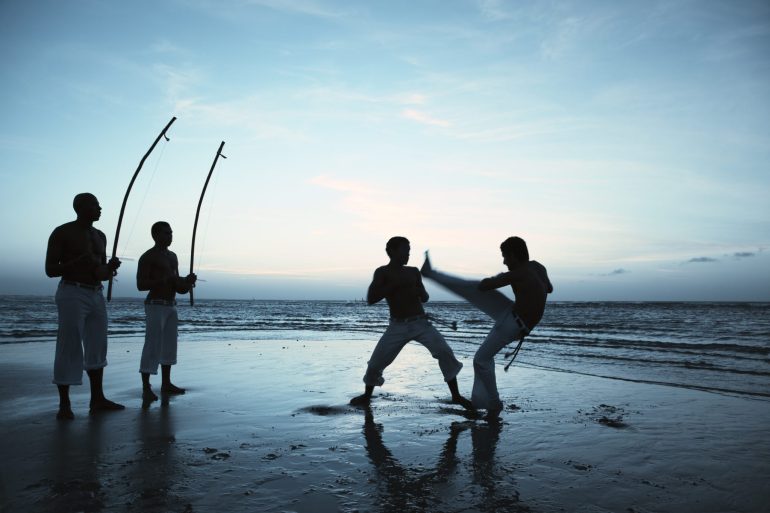 The beauty of movement with Berimbaus (Photo: tunart via Getty Images)

In Brazil, capoeira is called a game – jogo – and it is played by two capoeiristas surrounded by a ring made up of other capoeiristas known as a roda. Only the hands and feet are permitted to be in contact with the ground.

The main focus of this fast and incredibly versatile sport is to offer up resistance when being outnumbered or indeed at a disadvantage of size or strength. The main movement is called the ginga (literally, sway) and it is the wonderfully fluid triangular footwork used to set up sweeps, kicks, take-downs and most capoeira movements. The graceful actions bring the capoeiristas’ feet within millimetres of each other’s heads, knees, stomachs or even groins and they are all designed to escape attack rather than block.

The beauty of the movements is based on flexibility, incredible stamina, speed and what is known as malicia, or strategic deception.

What sets Brazilian capoeira apart from other martial arts is that the routines are accompanied by music and the movements match the rhythm of the beat. The ‘orchestra’ is usually made up of some or all of the following –

Reco-recos – a percussion instrument played by scraping the cylindrical body

What is the Martial Art Capoeira? 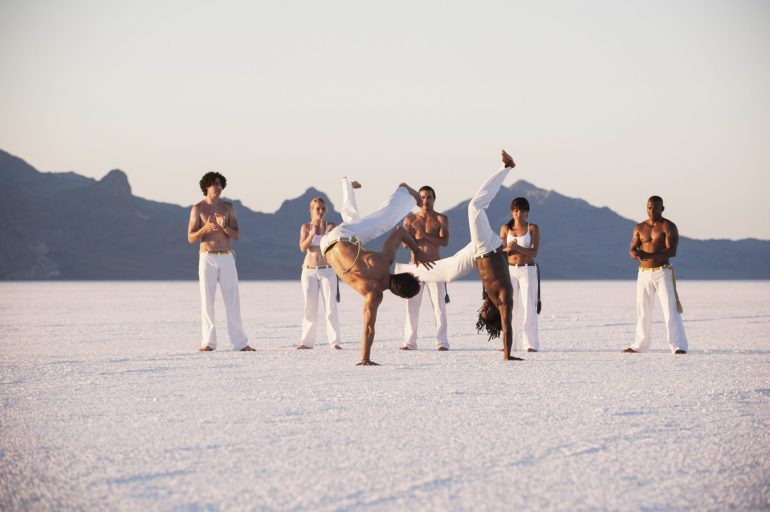 As with all forms of martial arts, asking ‘what is capoeira’ has a number of different answers. The sport developed at different paces around Brazil and there are three main styles –

Capoeira Angola This is perhaps the most traditional form of capoeira and it was preserved from the original by famous players including Mestre Pastinha and Mestre Waldemar. It is played at a variety of speeds and is performed lower and closer to the ground. The games are around ten minutes long and there is an emphasis on malacia, the art of strategy and deception.

Capoeira Regional This form of the sport was created by Manoel dos Rios Machado, otherwise known as Mestre Bimba in the early years of the twentieth century and is geared more towards fighting techniques. It is played at a fast pace with a cadenced ginga and the games last 2-3 minutes.

Capoeira Contemporânea This is one of the newest forms of capoeira and it was developed by Grupo Senzala in the 1960s. The capoeiristas stand far apart and the games are very fast, lasting around a minute. ‘Buying the game’ is a common practice whereby another player will cut in during a game to play with one of the original players and the style of play is largely dependent on the rhythm of the music.

So now you know the answer to the question ‘what is capoeira’ and we’ve explained Brazilian capoeira, perhaps it’s time to choose yourself a nickname and get started!