What is Bungee Jumping?

If you want an adrenaline rush like no other, bungee jumping is for you! The story of bungee jumping takes us on a global journey spanning hundreds if not thousands of years, from a tiny island in the South Pacific to Oxford University via the Clifton Suspension Bridge and then on to New Zealand. Read on to find out the answer to ‘what is bungee jumping’ and perhaps most importantly ‘what are bungee jumping cords made of’.

Who first stood on a tall bridge and wondered how great it would be to jump off with not much more than a big rubber band stopping you from slamming into the surface below at breakneck speed? Whoever it was started a craze for bungee jumping that spans the globe.

Here, we’ll tell you everything you need to know about what bungee jumping is, including the amazing facts behind the highest bungee jump in the world as well as finding out what is tandem bungee jump. Strap in for the ride of your life…!

The Fascinating History of Bungee Jumping 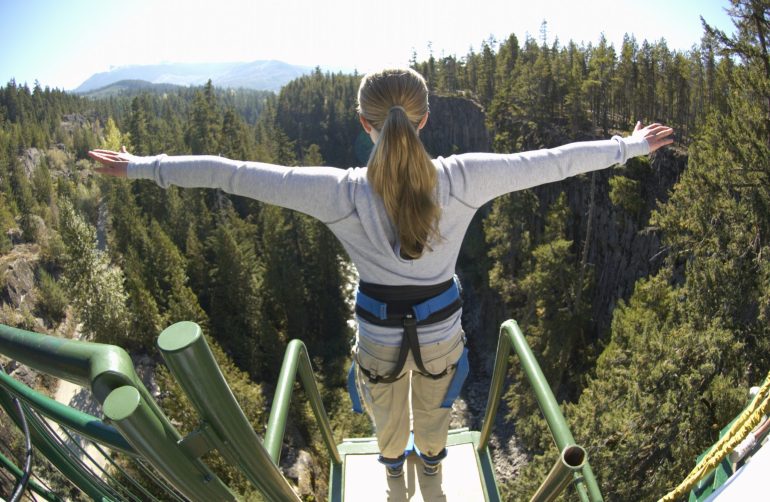 It all starts on Pentecost Island, one of the 83 islands that make up the nation of the Republic of Vanuatu in the South Pacific. It is 1,750km east of Australia and 540km west of Fiji. It’s remote. Very remote.

The story goes that a local woman who was mistreated by her husband tried and failed many times to run away. One time, she climbed up the tallest banyan tree on the island and tied a vine (known as a liana) tightly around her ankles. Her husband followed her up the tree and she jumped, yet the vine managed to break her fall. Her husband jumped after her, plummeting to his death.

Her exploits evolved into the ritual of land diving, said by some to be the predecessor of bungee jumping, which takes place during the yam harvest season in late spring. The island’s men construct wooden towers up to 30 metres high and tie two vines around their ankles. For the first-timers it is the ascent from boyhood into manhood, while for the more experienced it’s believed that it can ward off evil spirits, cure illnesses and even ensure a bumper yam harvest! 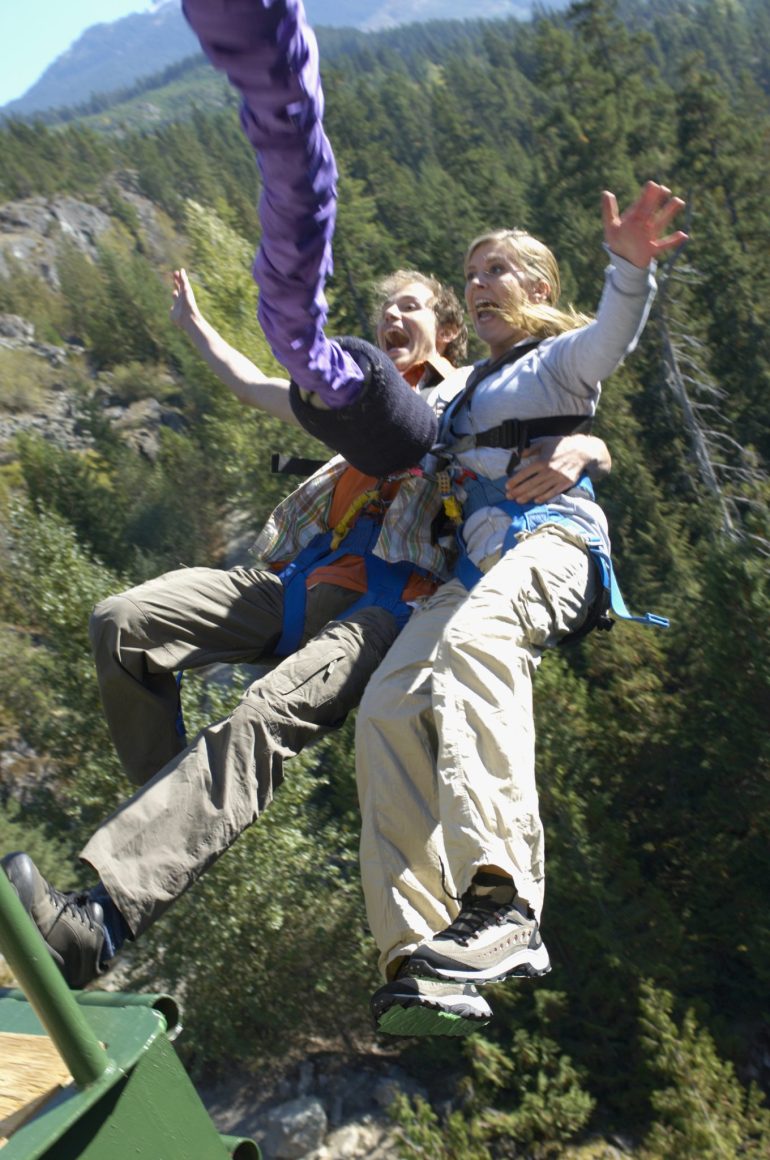 Put simply, bungee jumping is an activity that involves jumping head first from a high place – a bridge, a building, a dam or crane or even a helicopter or hot-air balloon – while attached to an incredibly strong elastic cord. The cord length, which is calculated exactly depending on your weight, prevents you from hitting the ground and instead allows you to bounce back up into the air. This essentially answers the most basic elements of the question ‘what is bungee jumping’.

Usually, you are attached to two harnesses, one around the ankles and another around the body for additional safety. There are incredibly rigorous guidelines and standards governing bungee jumping and over the years, millions of bungee jumps have taken place all over the world.

While most people do it alone, many ask what is tandem bungee jump? A tandem jump is no different to a solo jump – you have the same harnesses – but the only addition is that they are connected together and you are face to face with your jumping partner.

What are Bungee Jumping Cords Made Of? 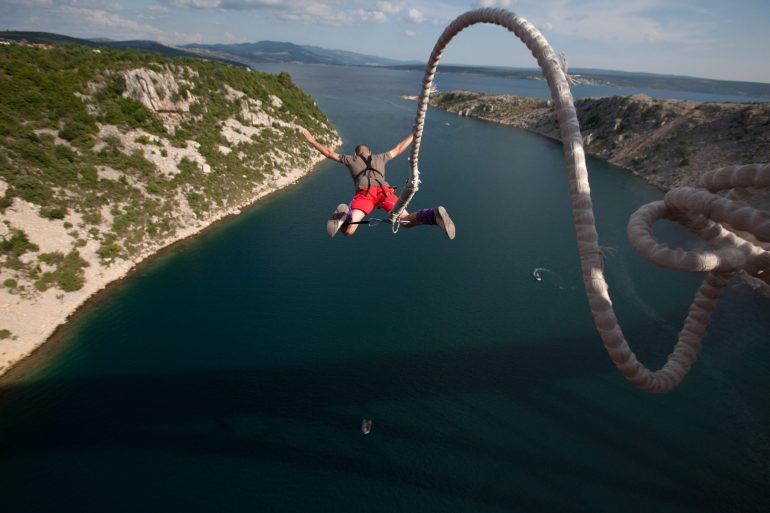 Sometimes known as a shock cord, the cords used for bungee jumping are natural or artificial rubber strands wrapped in heavy-duty woven cotton or polypropylene fabric, a synthetic thermoplastic polymer which is soft and lightweight and also, crucially, incredibly strong.

The rubber strands spring back to their original shape, they have amazing tensile strength and can take very heavy loads without breaking.

So now you know the answers to ‘what are bungee jumping cords made of’ and ‘what is bungee jumping’, how high do you think the highest bungee jump in the world is? You might be shocked at the answer!

How High? No Way! 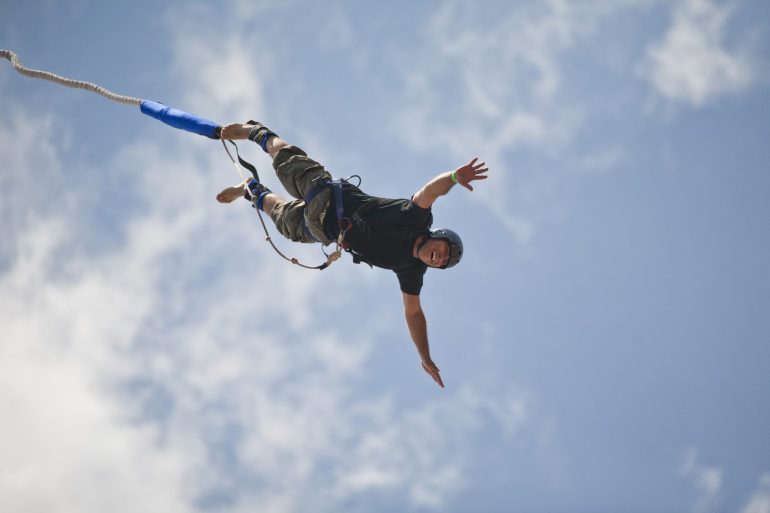 To be the best in the world at anything you need to go to extremes and the highest bungee jump in the world is no different.

The official record books have a number of different highest bungee jump in the world records and unsurprisingly some of them feature AJ Hackett.

Highest Bungee Jump From A Building In December 2006, AJ Hackett jumped off a 233 metre high platform at the Macau Tower in Macau, China and bungeed 199 metres.

Longest Stretched Bungee Jump Cord This record belongs to Frenchman Gregory Riffi whose 249.9 metre bungee cord stretched to an amazing 610 metres when he jumped out of a helicopter over the Loire Valley in France in 1992.

So now we’ve answered the question ‘what is bungee jumping’, are you ready to take the plunge?