Like many martial arts, the origins of aikido can be traced back many hundreds of years. It employs a complete repertoire of throwing, pinning, striking and joint-locking, as well as techniques using traditional Japanese weapons. Yet there is one fundamental difference between aikido and other martial arts. Aikido was created not just as a form of self-defence, but to also ensure that no harm comes to the aggressor. Read on to find out what does aikido mean from a practical and spiritual standpoint, as well as understanding what are the belts in aikido.

What is aikido? Martial arts such as jiu jitsu utilise an opponent’s power and momentum against them to subdue and aikido seeks the same outcome.

Yet in addition, practitioners are trained to neutralise their opponents and to make sure that confrontation ends with a peaceful resolution. Here we’ll answer the question ‘what is aikido’.

A Short History of Aikido 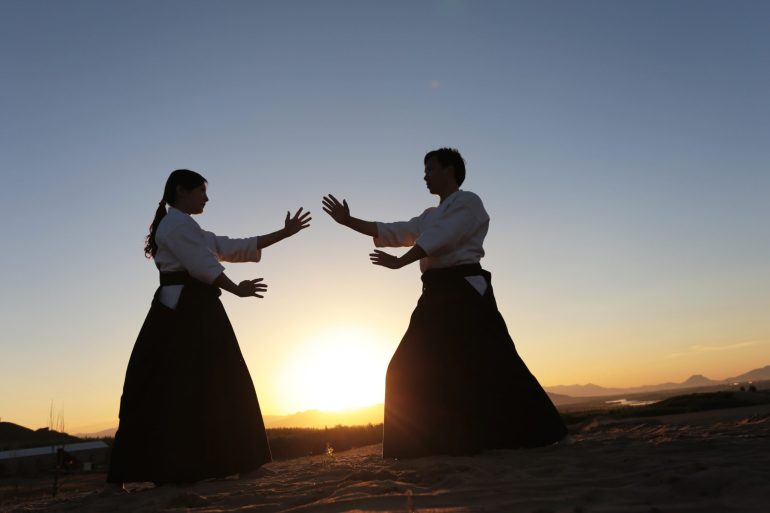 Aikido was developed by Japanese martial artist Morihei Ueshiba – known as ‘Ōsensei’ or ‘Great Teacher’ – in the 1920s as a physical representation of his spiritual, religious and philosophical beliefs.

He studied the ancient warrior traditions and while he saw aikido as a perfectly effective method of self-defence, that wasn’t enough. He wanted the physicality to balance with the spirituality.

From a technical standpoint, Ueshiba’s answer to ‘what is aikido’ was rooted in a number of different styles of jiu jitsu as well as traditional Japanese spear (‘yari’), staff (‘jō’) and sword (‘jūken’) techniques. However, it was his metaphysical beliefs that came to be the defining characteristics of aikido. For example –

‘Aikido is not a way to fight with or defeat enemies; it is a way to reconcile the world and make all human beings one family.’

‘The secret of Aikido is to become one with the universe.’

‘Aikido is primarily a way to achieve physical and psychological self-mastery.’

Morihei Ueshiba died in 1969 and many of his students went on to become famed practitioners in their own right. They developed new and improved tactics and techniques while remaining true to the primary principle of overcoming oneself instead of cultivating violence or aggressiveness.

What Does Aikido Mean?

There is no literal translation of the word aikido into English, but the most common interpretations are ‘the way of the harmony of spirit’ and ‘the way of harmonising energy’.

From a spiritual standpoint the answer to the question ‘what does aikido mean’ offers a different answer depending on what the practitioner is searching for, be it to learn self-defence, to look for enlightenment, to improve physical health and fitness or for peace of mind and body. The answer is different – and deeply personal – for everyone.

From a practical standpoint, aikido in its simplest form involves spherical movements intended to use an attacker’s force against them such as joint immobilisation, throws, dynamic movement and attacking the body’s pressure points. However the focus is on taking the aggression of the attacker and neutralising it by redirecting it in a non-violent way while considering the safety of the attacker.

It seems a strange paradox that attacking intent should be met with a peaceful, non-violent resolution but that’s one reason why aikido is such a draw for many considering a martial art to learn. 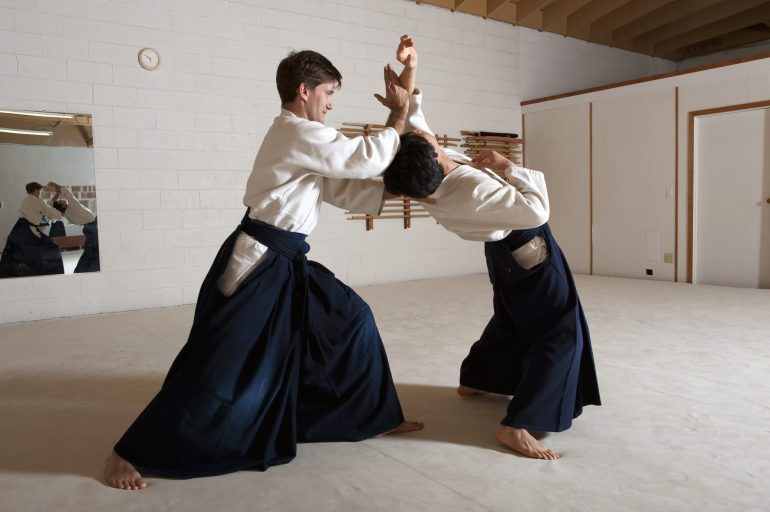 While aikido was developed by one man in the 1920s, it’s almost impossible to answer the question ‘what is aikido’? Martial arts by their very nature are fluid and over the last century, hundreds of different styles and interpretations have developed.

In fact aikido has been described as being like cake. There are thousands of different styles, tastes, shapes and flavours of cake but in the end, they are all cake!

What are the Belts in Aikido? 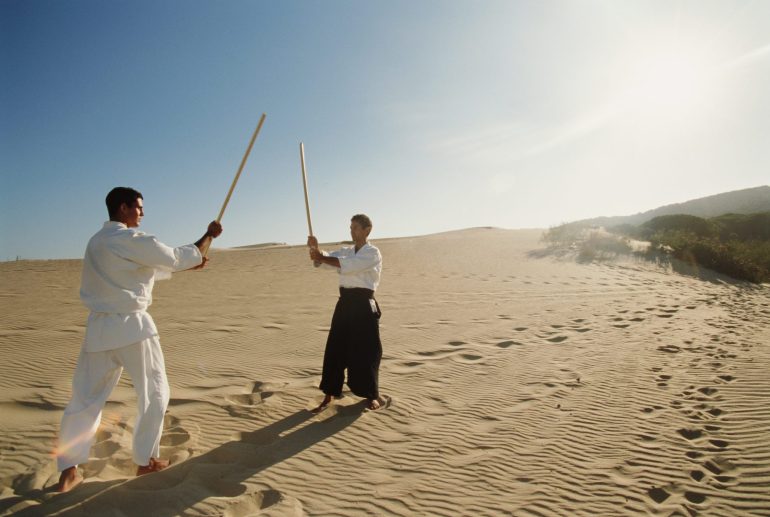 The belt system in aikido is based on the kyū degrees which run to black belt and the dan degrees which are achieved once you are at black belt level. There is no universally accepted grading system and belt colours can differ from school to school, but this is the general system of ranking –

Some aikido schools go all the way up to 10th dan and in the most traditional Japanese schools, only white belts (kyū) and black belts (dan) are used. The masters who attain 10th dan are also permitted to wear the seven-pleated hakama, the traditional garment used by ancient samurai warriors to protect their legs while on horseback where each fold has significant meaning –

So now you know the answer to the question ‘what is aikido’, it’s off to the dojo to train mind, body and spirit.